​How do you know if your about to sign up with one of the many internet scammers? In this blog “Internet Scammers – The List” we provide you with names of companies who have been halted or are currently under investigation by their country’s watchdog as well as detailed information on how to avoid the many online scams specifically targeting work from home or online marketing business opportunities.

There are plenty of legitimate companies and education resources that will teach you how to make money online, but unfortunately there are more that will simply take your money and give you nothing.

Unfortunately we can not list those businesses that we expect are a scam, legal reasons you know, but we will give you other sites to check out if you have a company in mind and are not sure if they are bogus.

After extensive investigations the Federal court has halted My Online Business Education (MOBE) and frozen the defendants’ assets at the request of the USA Federal Trade Commission (FTC). The FTC alleged the company has milked over $125 million in fraudulent, deceptive and misleading profits.

MOBE has been one of the biggest online business building platforms to come crashing down in recent years. Flash marketing hype as well as an initial low joining fee was successful in luring many thousands of people into the MOBE dynasty.

Unfortunately what they found out was that the upsells consisted of packages like the above for upwards of $2,000. The FTC pointed out in their claim that the average member was unlikely to earn more than $250 per annum, while shelling out thousands of dollars to MOBE in the process.

Digital Altitude – Who is Michael Force?

This company went the same way as MOBE. The FTC alleges more than $14 million has been scammed off individuals through Digital Altitude’s (DA) tiered membership which promised access to successful coaches when in fact they were merely salespeople scamming members into higher and higher membership levels.

The FTC allege founder Michael Force’s claims of earning a 6 figure income within 90 days were deceptive and misleading.

Michael Force is credited as the master mind behind Digital Altitude, although this isn’t his first attempt being the creator of other dubious platforms such as Carbon Copy Pro, Mobile Money Code and Empower Network.

Whilst Michael Force appears to be the driving “force” behind Digital Altitude, he didn’t go it alone with co-defendants Mary Dee, Morgan Johnson, Alan Moore and Sean Brown also in the FTC’s sites.

Some individuals lost more than $50,000 to DA and the FTC will pursue ligitation against the other defendants in the case.

Digital Altitude also traded as RISE and Aspire, and there are links to another defunct scam called My Top Tier Business..

After the FTC sued the individuals and companies associated with this system Amazing Wealth have settled with the FTC. The basis of the case involved the company promoting that through their program members could earn $5,000 – $10,000 within 30 days by promoting Amazon products through an affiliate marketing campaign.

The FTC sited that these were false earning claims and had no basis in fact.

This company has been banned from marketing and selling business opportunities and business coaching services.

This company were banned in December 2017 from selling business opportunities and business coaching services under a settlement with the FTC. The FTC claimed the company(s) lured people into purchasing an online scheme which again promised the members they would earn thousands of dollars working from home.

Further the FTC claimed they used “native” advertising, which is placing links which do not look like advertising, next to blogs and articles about making money online and working from home. This is in itself deceptive conduct by tricking people looking for business opportunities.

The FTC have two specific Acts – the FTC Act and the Business Opportunity Rule which clearly outline that the promoters must substantiate claims of earnings and must provide disclosures to prospects so that they can actively evaluate the system.

Work at Home EDU did neither of these.

The Tax Club – Out of Utah

Earning their founders over $5.4 million in less than a year the Tax Club claimed to run a payment processing business and were seeking representatives for the company. Those that signed up paid for the privilege and were promised substantial income to source clients for the business.

The Tax Club reportedly started out of Utah and grew to a sprawling business operating out of the Empire State Building, scamming the disabled and elderly out of over $200 million over a 5 year period commencing in 2008.

The FTC complaint included “They promised services but what they delivered were intense strong-arm tactics that defrauded people out of hundreds of millions of dollars, either through The Tax Club or one of its numerous shadow companies.”

This work from home “opportunity” continued to cost the participants in marketing campaigns, business mentorship lead lists and various add-ons all claimed as necessary to make the system profitable. The FTC claimed the company didn’t help their clients earn money or assist them to get accounts as promised.

The above businesses are unfortunately just the tip of the iceberg. There are several reputable websites who specialise in calling out scam operators and also allow the general public to submit their stories to help others.

If you need more information about a potential scam check out these sites by clicking on the links below:

For information on Australia’s Scam watchdog and Australian specific data on internet and online scams please read on.

The Australian government maintain a website called Scamwatch – you can access it by clicking here. Run by the Australian Competition and Consumer Commission (ACCC) this websites aim is to help consumers recognise and avoid online scams.

If you are an Australian citizen and you feel you have been a victim of a scam or you have come across a suspicious looking social media post or website you can report it to Scamwatch.

They also have a fantastic email alert called Scamwatch Radar which will advise you of any new internet and phone scams doing the rounds.

In Australia alone the statistics are staggering when it comes to the sheer number of scams and the amount of money lost by unsuspecting people. The graph below shows all scams to date for 2018 only: 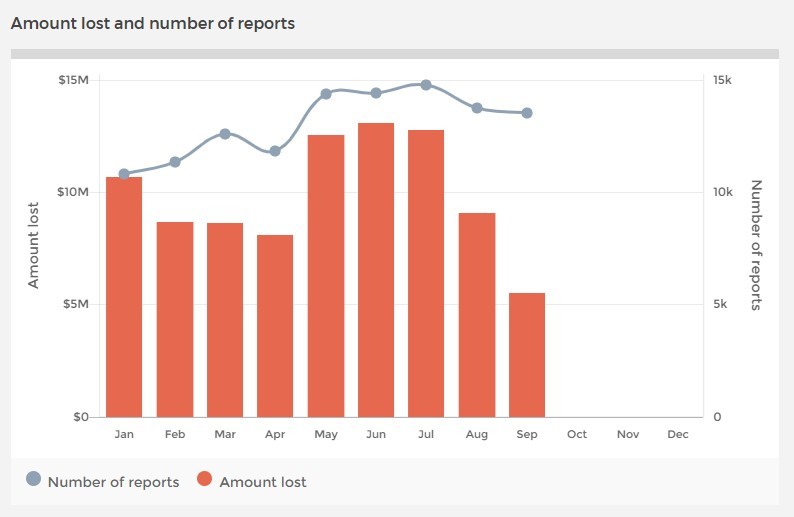 Get Rich Quick – No such thing!

Unfortunately those being scammed most often are the ones most unable to afford such losses. Investment scams took the most amount of money, these include get rich quick schemes, fraudulent investment funds and make money online scams.

As you can see from the stats there is no such thing as get rich quick schemes. If it sounds too good to be true invariably it will be.

If you are offered fast money or money for very little effort or skill you need to thoroughly investigate. More often than not there will be a start up cost, you might need to buy a kit to commence or invest your own money in adverts.

Once you have handed over your money the scammer disappears and so does your cash!

The other prevalent scam is asking you to process or pass on payments for foreign companies. This is basically money laundering, and is obviously illegal, and could not only lose you money but worst case scenario it can land you in jail also.

The most targeted age group for investments scams in Australia are the 25 – 34 year age bracket. I expect this is due to this group trying to get ahead and increasing their income.

The second group to loose big are those in the dating or romance category. Preying on the lonely and vulnerable, scammers know this group will part with their money for friendship. 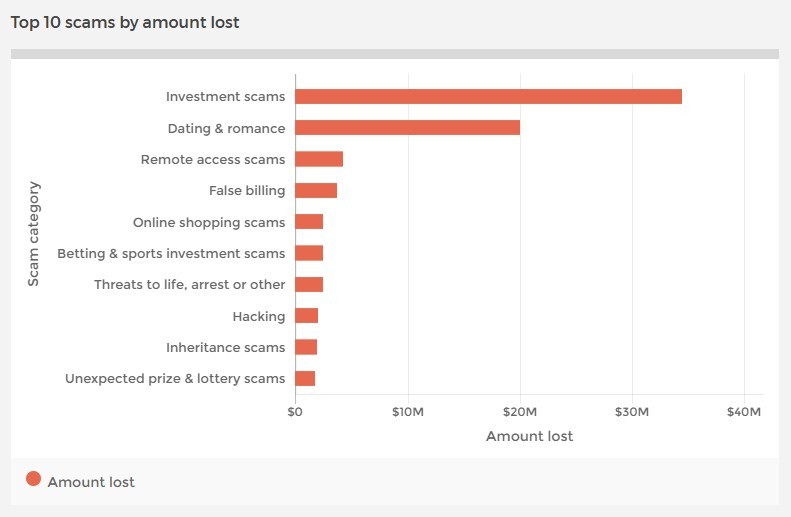 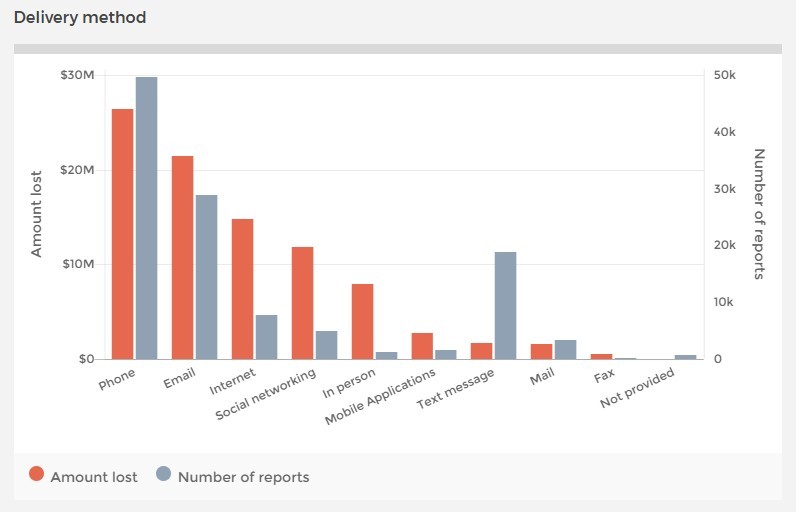 While phone scams come out on top as a single entity, email, internet and social media make up the next 3 and combined they almost double the amount lost through phone scams by the unsuspecting at a total of $48,135,630 so far this year (2018).

The top 7 warning signs of a scam are:

The bottom line here is that unfortunately the internet is littered with con artists and scammers who care not for your well-being and are simply in it to make as much money for themselves as they can.

If you are considering signing up for a work at home opportunity or online marketing business do your homework and run the company through the various websites listed above. If you can’t try out the company for free then cut your losses and find something else.

You can check out my thorough Guide which gives you an in depth look at affiliate marketing and also links to my top recommendation to build an online business.

Their membership fees and what you get for your money are clearly stated in the Guide and you can try the platform for free.

They do not ask for your credit card details, there is no risk and no obligation to continue if you don’t like the platform plus no upsells either.

If you have been scammed or you know of a company not doing the right thing, comment below and you just might save someone else from heartache and from losing their money.

It doesn’t matter where you are starting from, what you currently have or don’t have, if you too feel like there is more to life than what you are currently experiencing and you want to take charge and create a better life for yourself (and your family) then join me and we will do this together.

View all of Heidi's posts.

Can’t Find What Your Looking For?

Some of the links on this site are to Amazon. As an Amazon Associate, the Rat Race Escape Project earns commissions from qualifying purchases.